G207, an immunotherapy derived from a modified herpes virus is well tolerated in children with gliomas, and shows signs of clinical effectiveness 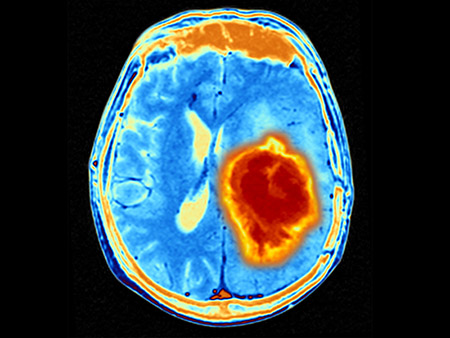 G207, an immunotherapy derived from a modified herpes virus is well tolerated in children with gliomas, and shows signs of clinical effectivenessA modified herpes virus, alone and in combination with radiation, has been shown to be well tolerated with early signs of clinical effectiveness in pediatric patients with high-grade brain tumors, or gliomas, according to findings from researchers at the University of Alabama at Birmingham and Children’s of Alabama. The findings were presented at the virtual American Association for Cancer Research Annual Meeting 2021, held April 10-15 and published online in the New England Journal of Medicine on April 10.

Brain tumors are the most common solid tumor in children, and aggressive types like glioblastoma have an extremely low survival rate: as low as 10 percent five years after diagnosis. Even tumors successfully treated by surgery, radiation and/or chemotherapy have a high recurrence rate.

“This is the first study utilizing delivery of a viral immunotherapy directly into the tumor of children with brain tumors, and the results indicate the engineered herpes virus can be delivered safely into tumors located in all areas of the cerebrum in children,” said Gregory Friedman, M.D., professor in the Department of Pediatrics at UAB, research scientist at the UAB O’Neal Comprehensive Cancer Center, and director of developmental therapeutics for the Alabama Center for Childhood Cancer and Blood Disorders at UAB and Children’s of Alabama. “The key findings thus far are that the approach is safe and well tolerable, and the preliminary evidence of efficacy is promising.”

In the Phase 1 clinical trial of 12 patients between 7 and 18 years of age, the investigators employed a modified virus known as G207, derived from the herpes virus responsible for cold sores. The virus is genetically altered so that it infects only tumor cells. When injected into a malignant brain tumor via a catheter, the virus enters the tumor cells and replicates. This kills the cell and releases the virus’s progeny to hunt out other tumor cells. Additionally, the virus induces a strong immune response by the body’s immune system, which can attack the tumor. The trial tested G207 alone and then combined with a single low-dose of radiation designed to increase virus replication and spread throughout the tumor.

G207 is the product of more than 30 years of research. James Markert, M.D., MPH, chair of the UAB Department of Neurosurgery, was part of the team at Massachusetts General Hospital in the early 1990’s that first developed the concept of using oncolytic herpes viruses. He worked on the parent virus for G207 and conducted the first clinical study of G207 at UAB. Today the use of viral therapies is under investigation for nearly every type of cancer. 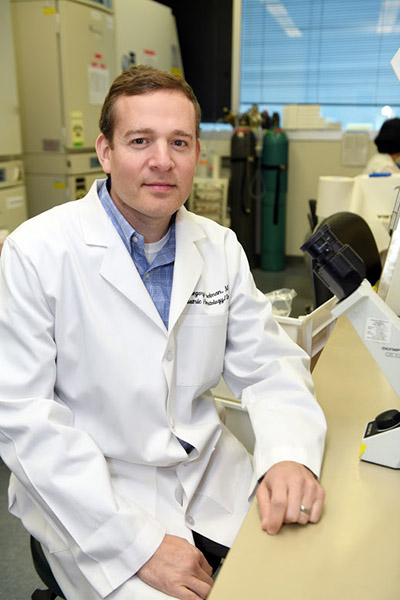 Gregory Friedman, M.D.A second-generation virus, called M032, has been developed by Markert and collaborators Yancey Gillespie, Ph.D., professor of neurosurgery, and Richard Whitley, M.D., Distinguished Professor of pediatric infectious disease, and is in clinical trials at UAB in adults with glioblastoma. UAB investigator Renee Chambers, DVM, M.D., is using M032 in a study of brain tumors in dogs, which can develop tumors very similar to those in humans.

Friedman’s team reports that G207 alone or in combination with radiation therapy was well tolerated, with no serious adverse side effects attributed to the treatment.

“There are still more studies needed; but thus far, viral immunotherapy with several different viruses, including herpes virus, has shown promise in treating high-grade brain tumors in both adults and children,” Friedman said. “We also have an ongoing clinical trial to test the safety of G207 when delivered into the cerebellum, an area of the brain that has not been tested before in adults or children but is the most common location for pediatric tumors to arise.”

Friedman says the next steps are to determine the ideal timing to treat patients and what therapies can be used with viral immunotherapy to maximize the anti-tumor immune response. Based on the encouraging Phase 1 trial results, he and his team are working with the Pediatric Brain Tumor Consortium to develop a multi-institutional Phase 2 trial of G207 for progressive pediatric high-grade glioma, which they hope to initiate later this year.

Friedman is supported, in part, by contracts between UAB and Eli Lilly and Co. and Pfizer. Markert and Whitley have financial interests in Treovir, LLC, which provided G207 for the trial. They were not involved in any aspect of the conduct or data analysis of the study.