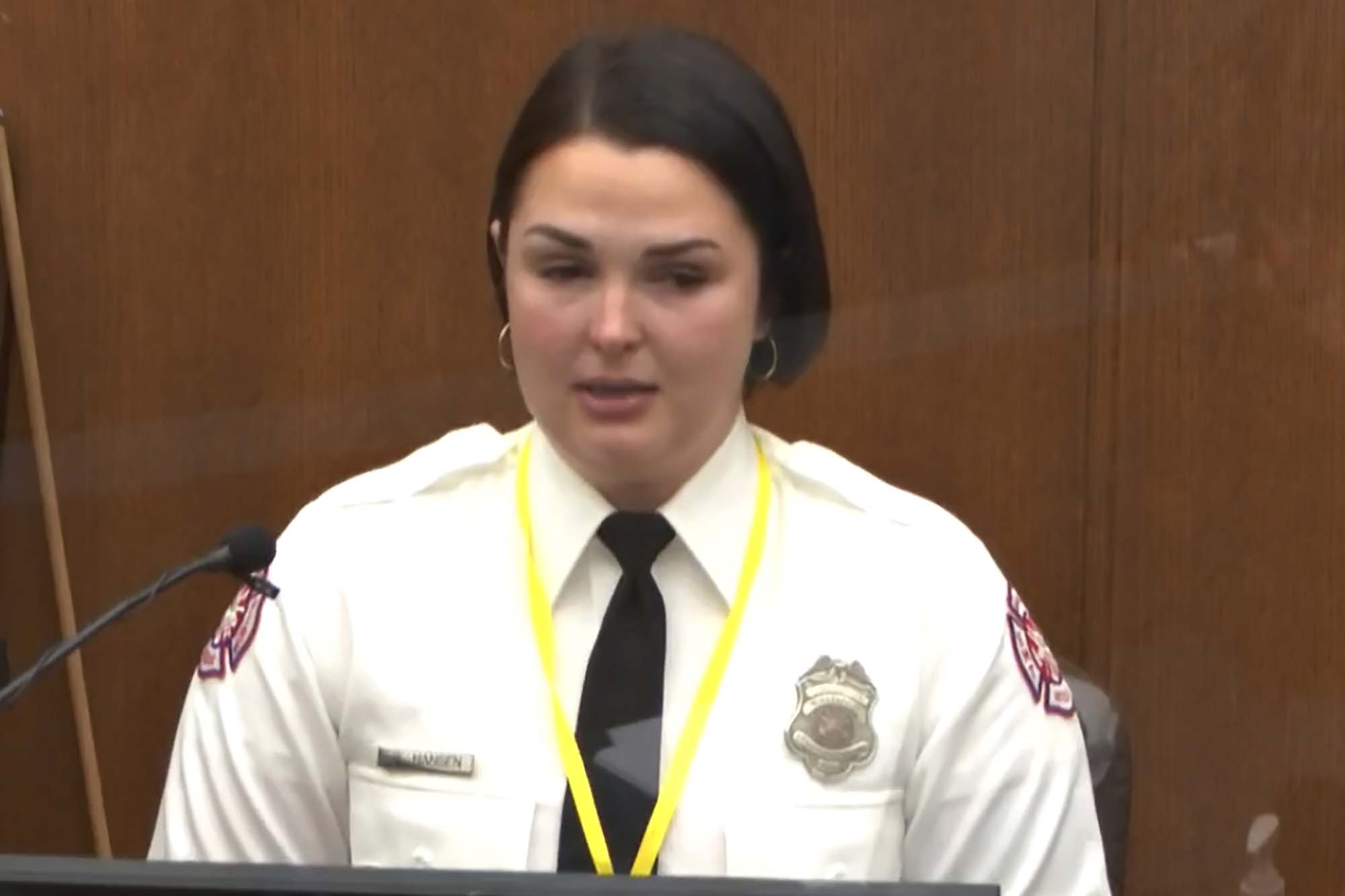 An off-duty Minneapolis firefighter said she was “desperate” to render medical assistance to George Floyd during his fatal encounter with police — and testified that ex-cop Derek Chauvin looked “comfortable” while pressing his knee on Floyd’s neck.

Genevieve Hansen, an EMT, said Tuesday at Chauvin’s murder trial in Floyd’s death that she pleaded with cops but grew increasingly upset when they refused.

“I was concerned to see a handcuffed man who was not moving with officers, with their whole body weight on his back, and a crowd that was stressed out,” Hansen, 27, testified.

“He was not moving,” she said. “His face was, the first thing that concerned me is his face was like smooshed into the ground,” she said.

“I thought his face looked puffy and swollen, which would happen if you were putting a grown man’s weight on someone’s neck.”

“I identified myself right away because I noticed that he needed medical attention,” she said. “My attention moved from Mr. Floyd, to ‘how can I gain access to this patient and give him medical attention or direct the officers?’”

Hansen said she attempted to get to Floyd but was held back by former Minneapolis officer Tou Thao — one of three other ex-cops due to stand trial in the case.

“He said something along the lines of, ‘if you really are a Minneapolis firefighter you would know better than to get involved,’” she said Thao told her.

Hansen also said that Chauvin “seemed very comfortable with the majority of his weight balanced on top of Mr. Floyd’s neck.”

“In memory he had his hand in his pocket,” she said. “He looked so comfortable.”

Defense attorney Eric Nelson noted inconsistencies in Hansen’s earlier statements to investigators and noted that she was unaware at the time that 911 had been called.

The EMT later sparred with Nelson on cross-examination — to the point that Hennepin County District Court Judge Peter Cahill cautioned her to stick to answering -questions.

“You would agree that your own demeanor got louder and more frustrated and upset?” Nelson asked her about Hansen’s actions at the scene.

“You called the officers a bitch, right?” Nelson asked.

“I got quite angry after Mr. Floyd was loaded into the ambulance.”