Poise characterizes conductor Avip Priatna’s reading on the works of the conflicted composer, presenting them in lyrical storytelling.

The music itself was profoundly constructed to tell a narration of the flood of feelings that may imbue while standing in the middle of a vast piece of land listening to the steps of marching soldiers getting closer.

There were sounds of desperation and sorrow, followed by triumphant cheers that ended in a folk party. 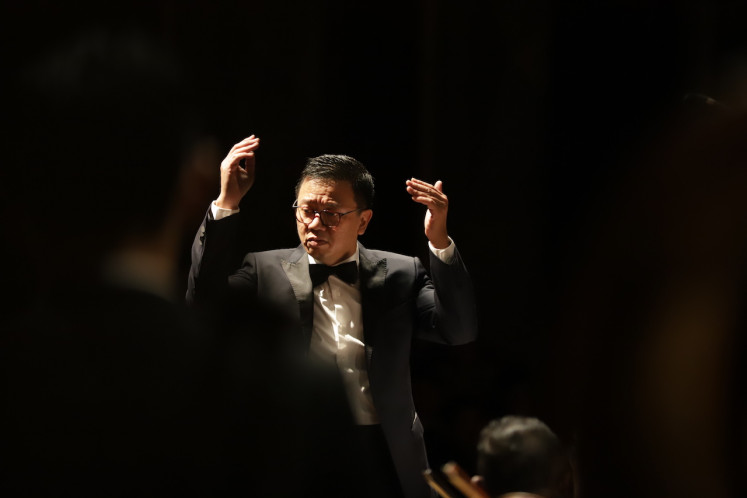 The Slavonic March, Op. 31, also known by its French title Marche Slave, opened the Malam Tchaikovsky (Tchaikovsky Night) music performance on Feb. 21 at the Usmar Ismail Hall in South Jakarta, by Jakarta Concert Orchestra under the direction of Avip.

The violin concert was dedicated to the Russian composer to commemorate his 180th anniversary.

For the special night, the orchestra invited South Korean violinist Park Sueye to play the over 30-minute Violin Concerto in D major, Op. 35, one of the best compositions for the violin concerto and has become a standard repertoire in any classical music stage.

Park, who has done many international rounds and shared the stage as a soloist with the Orchestra of the Komische Oper Berlin at the age of 11 performing Italian composer Niccolò Paganini’s Violin Concerto No. 1, produced a rich sound that showed her virtuosity.

The technical demand of the work stirred no fear from her as she hit all the high notes, brilliantly getting through the dynamics and the changes in tempo in all three movements of the composition.

The 20-year-old showed her individual character in the lyrical composition but it was noticeable that she played everything that was written, especially the fragments that were frequently repeated. 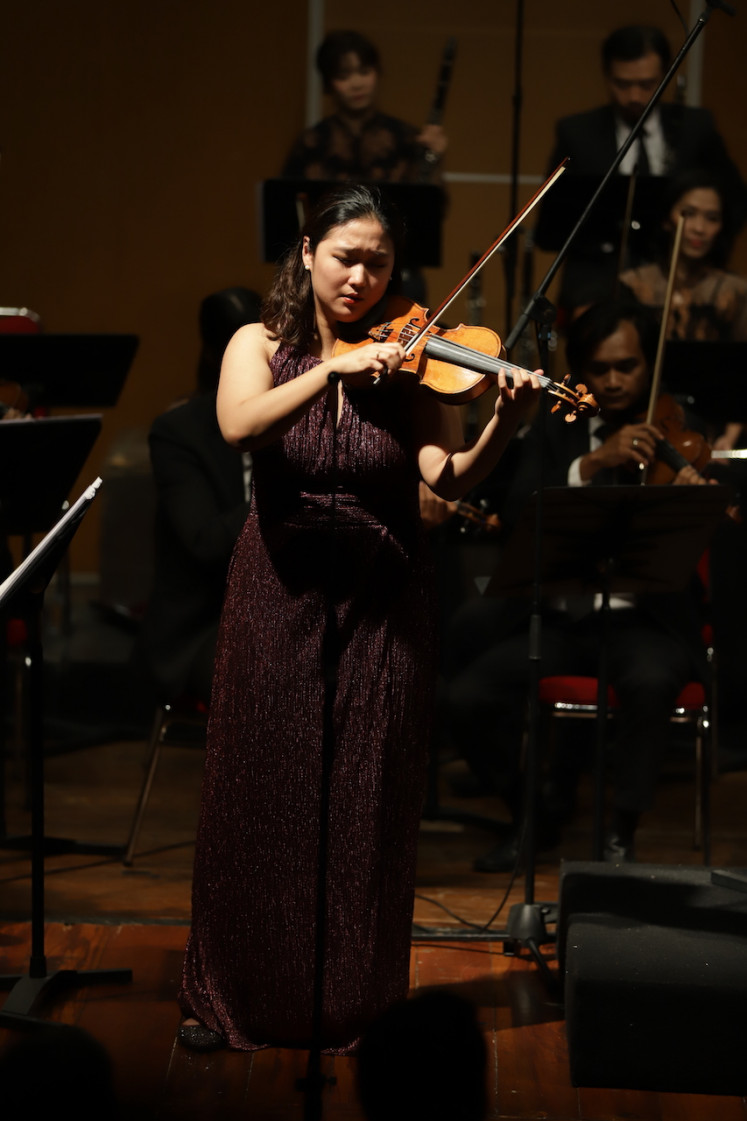 Her sincerity on stage and the full support of the orchestra’s brass and bass strings musicians called for a standing ovation.

After a short break, the orchestra performed its last number, the four-act Symphony No. 5 in E minor, Op.64, an ambitious work of Tchaikovsky who meant it as a piece of absolute music instead of mere program music.

Like the Symphony No. 4 he wrote 10 years prior, the composer created the piece in cyclic form, in which the main theme of the music recurs throughout the tetralogy but played by different instruments in various tempo and patterns of rhythm.

The clarinets opened the first movement in a slow tempo to mimic darkness and as other instruments canonically repeated the theme, the intensity was built to reach its end, in which a duet of clarinets and bassoons created a mysterious atmosphere to prepare the audience for the next part.

The thrill continued with the strings laying the foundation for the French horns, which carried out the lyrical melody that characterized the work, followed by the clarinets and the solo oboe to complete the rhythm. The interactions between the brass and the strings gave a soothing sound to the act, beautifully ended by clarinets.

The third movement began with something different, a piece of waltz music with a simpler sound, but the changes in the patterns of rhythms that ensued served as a bridge for the main theme, which appeared right before its closing and continued to start the final act.

The last part of the tetralogy was dominated by bass strings and woodwind instruments, whose intensity was built on the dynamics in tempo and rhythm. Although they played the same theme fragment, the significant change in the orchestra’s timbre made the finale colorful and rich with dramatic effects.

The compositions performed were not Tchaikovsky’s most familiar works compared to the famous ballet accompaniment such as the music for Nutcracker and Swan Lake.

“Classical music in Indonesia is not yet popular, so we wish to present different [compositions] every time to keep the audience entertained,” he said after the concert.

He explained that the duration of the music and budget were also put into consideration along with the contrasts in the three compositions that he said had every nuance of emotions that would appeal to the audience.

“The acoustics of the hall is not sufficient for the orchestra, but it’s affordable and has enough seating capacity for a paying audience. It’s a better choice than performing in a luxurious concert hall but with lots of empty seats.”

The far-from-perfect acoustics were indeed the only glitch that occurred during the concert, which ended after the orchestra played Trepak from the Nutcracker oratorio as an encore.

Avip’s reading of the three compositions was on-point, sewing them all together to tell a story about the composer. It seemed to portray Tchaikovsky’s emotional turmoil, in the form of a diversity of octaves, chords, and running notes.

The whole performance was lyrical rather than aggressive, but at the same time, giving full attention to the constantly changing tempos and rhythm that perhaps comes from his experience as a choir coach and conductor.

“I tried to see the music language used by Tchaikovsky objectively. However, I also inserted my personal taste in how to present the music in the right proportion and to make all of the compositions connected to each other,” he said.

Jakarta Concert Orchestra will play music from the 1990s for its next concert on April 5, featuring the Resonanz Children’s Choir and the Batavia Madrigal Singers.