There’s such a fine balance to strike when resurrecting a series that’s been dormant for as long as Ghosts ‘n Goblins has. Gaming has changed so much since Arthur’s heyday of the late 80s and early 90s. If the developer leans too much into nostalgia will new players embrace it? Will old fans even want a title that lacks many of today’s modern conveniences and trends? Alternatively, if it produces something too modern and loses the soul of what made the series so special, will fans be interested at all? My preference is developers go hard in one direction or the other. And boy did the team go hard in one direction here. 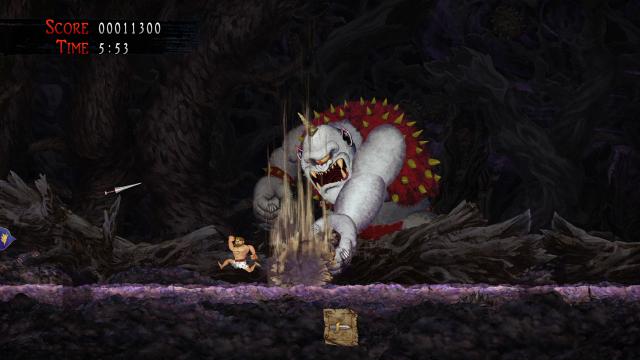 Much to my delight, Ghosts ‘n Goblins Resurrection leans heavily into its legacy. At no point does it attempt to be anything other than a Ghosts ‘n Goblins game, modern conventions be damned for the most part. Level design is eerily similar to levels found in past entries in the series, but with some new twists to keep them from feeling borrowed. Enemies and weapons will all feel familiar to fans as well, but as with the levels they’re often deployed in interesting new ways to keep players on their toes. Cherry-picking the best and most memorable parts of the series is a great way to ensure we’re only left with the finest material Ghosts ‘n Goblins has to offer.

The new art style also suits the atmosphere of the game incredibly well. The use of colors is especially masterful. Many of the horror-inspired themes of the title call for dark and dull colors, but the occasional splash of vibrant color really sticks out and looks fantastic. The soundtrack has had just as much care put into it too; it’s beautifully orchestrated and each track is unquestionably tailored to the theme of the stage it represents. 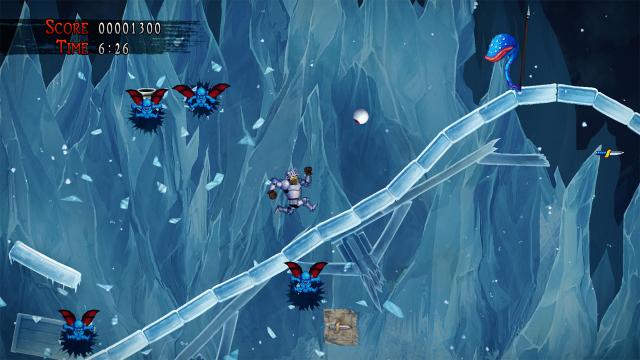 Ghosts ‘n Goblins games are infamous for their difficulty and Resurrection is no exception. Checkpoints aren’t very far apart, but every single inch in between them is packed full of monsters, traps, and pits to make your trip seem nearly impossible until you’ve gotten a good lay of the land. Thankfully the controls and hit boxes are as tight as ever, so once you get used to committing to each jump or throw of a weapon and manage to adapt to the high initial learning curve then you should start moving forward at a steady pace. As one of the modern conveniences allowed in this entry, if you do struggle repeatedly in a certain area then the game will allow you to drop the difficulty down a level and continue from your furthest obtained checkpoint. You take a reduction in score as a penalty, but honestly who has ever played Ghosts ‘n Goblins for the score?

Beyond your individual skill and knowledge of what’s ahead improving, there are a couple of other elements baked into Ghosts ‘n Goblins Resurrection that makes things easier as you progress. By tossing weapons into suspicious areas, or physically touching certain points, you can discover hidden chests and Umbral Bees. Chests provide either new weapons, repaired armor, point-related items, or more Umbral Bees. The Umbral Bees are used as magic currency to unlock new spells and abilities to make Arthur more formidable. So if you’re really struggling with the difficulty it can be a great advantage to explore and experiment in order to find as many Umbral Bees as possible.

Those spells are varied and offer great utility, including being able to turn enemies to stone/frogs, screen-wide thunder blasts, extra weapon slots, the ability to replenish your armor, and even a small chance to revive after a death. The magic skill tree even lets you remove spells you’re not finding so useful and reuse the Umbral Bees on spells on a different branch that may be more beneficial to your play style. This means you have the option to respec Arthur in-between levels if you desire. This reinvented magic system is far beyond what the series has offered in the past and does a great job of giving players plenty of options; it’s also delightfully symbiotic with the Umbral Bees and exploration elements of the game. 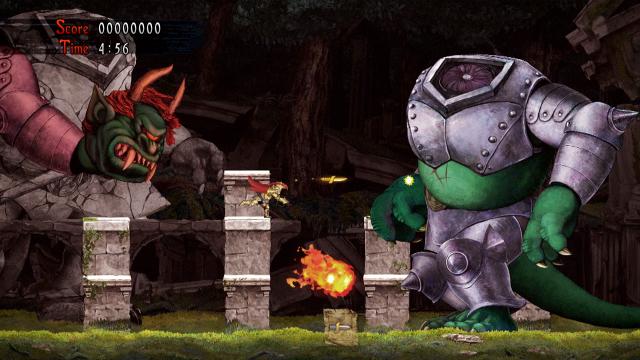 The co-op mode is very simple but effective, and another interesting way of tweaking the difficulty more in your favor. It can be toggled on/off at any point by the first player and the second player gains control of one of three spectral beings when it’s toggled on. The first spectral being can offer up a temporary shield to protect Arthur from projectiles or low level enemies. The second can build temporary bridges to help Arthur across pits or to climb to areas that might otherwise be challenging to reach. And the final being adds straight up extra firepower that can make short work of enemies and even certain bosses while Arthur takes cover if necessary.

You can switch between the three spectral beings as desired and each one has its own health, which will recover after a short period of time once they die. When experimenting with the co-op with my children, my older son was able to exploit these spectres to great benefit, so it’s definitely an effective way of making the game far easier if you so wish. My younger daughter was also able to goof around as much as she wanted without negatively affecting my progress as Arthur. 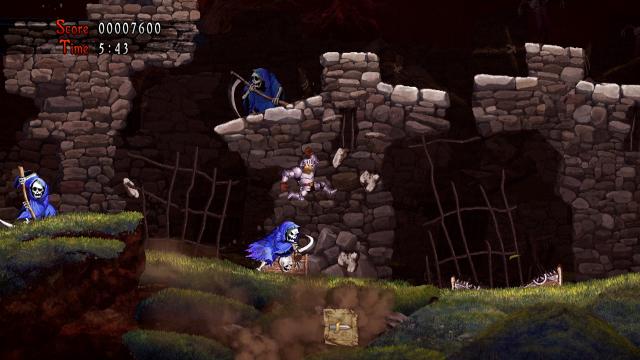 Apart from hunting down Umbral Bees to improve your magic skills, Ghosts ‘n Goblins Resurrection does offer some other reasons to keep playing once you’ve finished the main campaign. As with some of the other games in the series there’s a second quest, which takes the form of shadow versions of the same levels you’ve just beaten. In these stages the layout of the level is the same, but some sort of quirk is added to the area. One of my favorites is where, if you shoot a background ‘eye’ in the initial stage, additional minor enemies will spawn to impede your progress. In the shadow version of this stage for every ‘eye’ you hit a Red Arremer enemy will appear on screen. So unless you’re extremely careful with your weapon throws and ensure they only strike enemies you’ll soon be swarmed by half a dozen red devils at once. There’s also a list of challenges that act like a trophy or achievement list, one of which teases a ‘True Ending’. I’ve yet to unlock it but I’m determined to do so. Between the vastly improved magic system, the strong push to explore stages for secrets, and the multiple difficulties and shadow versions of stages, there’s never been more reasons to keep playing a Ghosts ‘n Goblins game beyond your initial playthrough.

Ghosts ‘n Goblins Resurrection is definitely not a game I would recommend to everyone. But for those who do enjoy a good Ghosts ‘n Goblins game it’s really hard to go wrong with Resurrection. By taking the best ideas from the past, adding just the smallest pinch of modern sensibilities, and making it look and sound better than ever it’s hard not to feel like this is perhaps the strongest game in the entire series. The developers obviously knew what kind of game they wanted to make – not one with mass appeal, or even one that was likely rejuvenate the series – but a pure Ghosts ‘n Goblins title. It’s beautiful and brutal, just like it should be.

More than 20 million in UK vaccinated