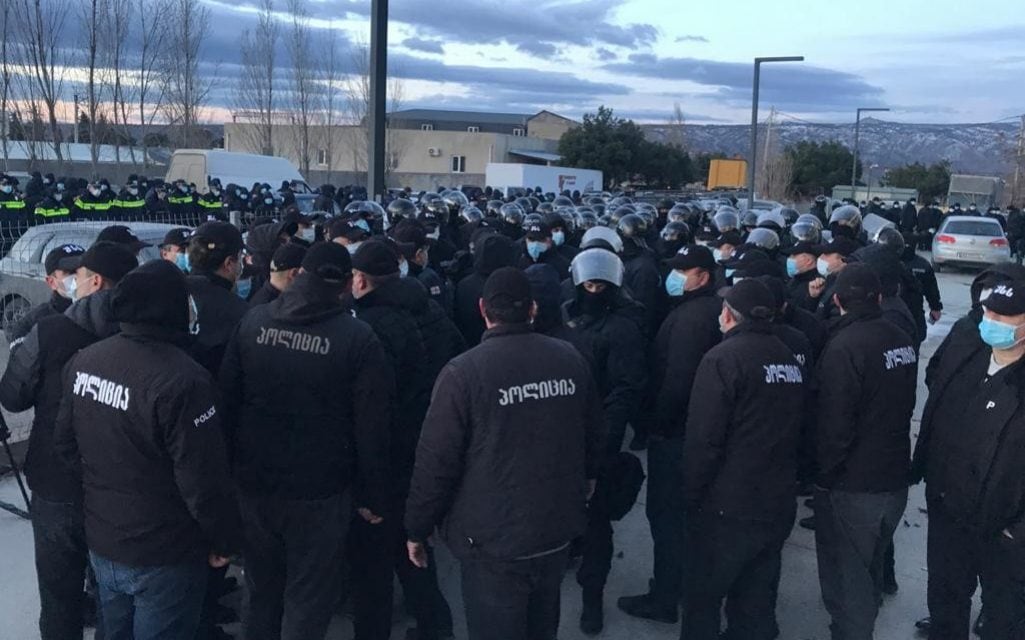 Mr Melia is charged with ‘organising mass violence’ over his role in anti-government protests in 2019. He faces nine years in prison and has called the charges politically motivated.

On Tuesday afternoon, thousands gathered outside Tbilisi’s State Chancellery building to denounce Mr Melia’s arrest. Protesters blocked the traffic and set up tents near the parliament on a day that marked the 100th anniversary of the Soviet occupation of Georgia.

The British and US embassies in Georgia condemned the arrest and violent police operation. “Shocked by the scenes at UNM headquarters this morning,” British ambassador Mark Clayton wrote on Twitter.

“Violence and chaos in Tbilisi are the last thing Georgia needs right now. I urge all sides to act with restraint, now and in the coming days.”   “Force and aggression are not the solution to resolving Georgia’s political differences,” said the United States embassy in a statement.

“Today, Georgia has moved backward on its path toward becoming a stronger democracy in the Euro-Atlantic family of nations.”

US lawmakers have in recent years accused the ruling Georgia Dream party, which has held power since 2012, of ‘democratic backsliding’, undermining hopes that the former Soviet state would become a torch-bearer in a region where democracy has struggled to take hold.

Critics say Bidzina Ivanishvili, the billionaire founder of Georgia Dream, maintains control of the country despite announcing last month he was leaving politics.

Independent observers said the 2020 vote was marred by irregularities including pressure on voters but that overall it was ‘competitive’ and ‘fundamental freedoms’ were respected.

Some opposition figures refused to take their seats in parliament after the UNM won just 27 per cent of the vote.

The party was founded by Mikheil Saakashvili, Georgia’s former president, who now lives in exile in Ukraine. Mr Melia was named the party’s new leader in late December.

Tbilisi has sought to join the EU and Nato amid widespread support for a Western-focused foreign policy against Russia, which invaded the country in 2008.

“We have seen a new configuration of balance in our region, which shows that now, as never before, the Black Sea and the Caucasus are becoming more important in terms of security and should attract more attention from Nato,” President Salome Zourabishvili said during a recent visit to Brussels.

Russia’s other border-states have been shaken by recent political instability, with a large protest movement in Belarus seeking to oust president Alexander Lukashenko after elections widely described as rigged, and Kyrgyzstan undergoing its third revolution in fifteen years.